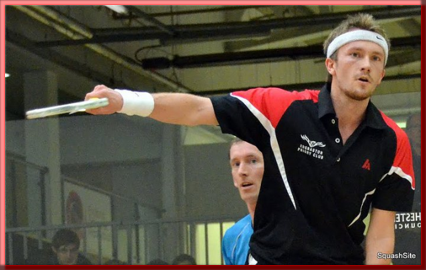 Chris Tasker-Grindley
Tasker’s Tips are applicable to all players in our club
Balls
I play with a double yellow dot. But if you find that the ball is not warm enough to bounce up, then it is not really squash; so try a single yellow spot.
Coaching
The game has evolved massively, no longer is it a game of who can last the longest. It is more about attacking & taking the ball early. If your game is not improving, perhaps lessons would help you move up the leagues. Or maybe you were taught wrongly in the first place. It is never too late to learn, for the last 18 months I have been coaching a 68 year old multiple Masters winner & ex British Open Champion.
Eyewear
Suffer a little inconvenience, or would you rather have an eye problem? Eye guards are an unfashionable necessity. I really should wear eye guards when coaching anyone who lacks court awareness. Definitely wear them if you are a beginner, or competing in the lower leagues.
Footwear
You need ankle support, so avoid the older style shoes such as Dunlop Green Flash or old Hi-Tec; if they look flimsy don’t wear them. I like Prince squash shoes.
Nerves
I used to get so nervous that I would actually vomit before a competition - even though I was confident of winning. It was so severe, that I consulted a Sports Psychologist. However nerves are not all bad, the adrenalin can be harnessed, so use it positively – embrace the nerves! I concentrate on what I am going to do (my game plan) rather than the event. Nervousness tightens my grip on the racket, so I focus on my wrist.
Practice
It is easier to practice technique away from a match situation. I recommend solo practice once per week. Try drives, volleys & drops to the nick as well as ghosting (without the ball).
Pre-Match Preparation
I want to start the match completely psyched up. Before the game I play music (drum n bass or just something very catchy), something familiar can calm nerves. Off-court, I stretch until I raise my heart rate & I can do a full length lunge. I get a lot from the warm up, I get on the tee & volley everything until I get my eye in, then I move back.
Rackets
Racket choice is very personal. A smaller head has a smaller sweet spot; Avoid a square grip; If the racket is either too heavy or head heavy, it is harder to control the racket through the swing.
Racket Grips
I recommend the Karakal Super PU (not the Air or Kushy grips) which I change when slippery. I find the lighter colours (white yellow, pink) last longer; the darker colours (especially black) quickly deteriorate. Fit the Karakal Super PU onto the bare handle & overlap as little as possible.
Racket Strings
I restring my racket myself, every week. I suggest you restring whichever is the soonest of a) either when the strings start to fray or b) at the frequency of the no of times you play per week, so if you play twice a week then restring twice per year.
I prefer Technifibre to Ashaway strings. For optimum durability/feel I recommend the Technifibre 305 (green) - one of the 8 strings that Maurice Robinson Sports can fit when restringing.
I recommend a string tension of 28 lbs. If you wish to experiment, try between 27lbs & 30 lbs. A looser string gives more power & a larger sweet spot, a tighter string gives greater touch.
I offer a restringing service, for prices see:  Racket Stringing

England Squash recently rebranded 'Racketball' as 'Squash 57' to help distinguish 'racketball' from the 'racquetball' played in USA. In American racqetball the court is long, thin, there is no tin & the ceiling is a legal playing surface. Squash 57 (Racketball) is played on a conventional squash court with a squash 57 (racketball) ball - either black or blue (bouncier)
Stretching
Without doubt, stretching helps prevent injury & will definitely extend your squash career. If you don’t stretch at the moment, you may just have been lucky so far. If you don’t stretch after a match you are going to have stiff muscles the next day. I advocate dynamic stretching before a game & static stretching afterwards.
Stroke
You are entitled to a stroke (rather than a let) when your opponent is:
a) in the path of your racket swing
b) blocking the route of the ball to the front wall
c) impeding you from hitting a winning shot (eg a volley).
Chris Tasker-Grindley v Greg Gaultier (World Ranking 3) in French Premier League Division 1, April 2013
[Click on bottom right of frame for YouTube Full Screen]
Game 1: Gaultier wins 11-7
Game 2: Gaultier wins 11-8
Game 3: Gaultier wins 11-7
Back to content